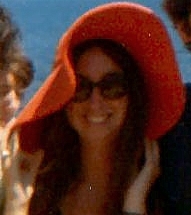 The summer of 1970 was remarkable in many ways, not least because it saw me heading for North Africa with my friends Pam and Pauline. We’d come across the Safari brochure, which seemed to offer a unique experience for very little money and so it proved to be.

The toughest part for me was the long journey down from London to southern Spain, where I was introduced to Bacardi and Coke, much heavier on the former than the latter. That probably contributed to the good night’s sleep that followed and certainly to the cracking headache with which I awoke the following morning. Squinting into the bright sunshine, I donned my orange sunhat and prepared to cross the Mediterranean.

As we passed Gibraltar, our courier Nick was full of information and (probably tall) tales of what awaited us in Asilah. I loved the base camp with its blue tents and still have the carpet/wall hanging I bought from the bazaar. The next couple of days are something of a blur now, but dancing in the Fort and riding a camel on the beach were certainly part of it, together with an immaculately dressed young local man whose sole occupation seemed to be keeping the swarms of insects off whatever we were eating.

Then it was time to embark on the ‘safari’ part of our holiday. The group was divided between two ‘desert trucks’ which were to travel in convoy. One was driven by Paul, whose surname I forget, and the other by the inimitable Peter Clarke. The roads were bumpy, to say the least, but the canvas awnings shielded us from the fierce sunlight and occasional sandstorm. There was considerable competition to ride in the cab with Peter, which offered a much better view and other fringe benefits.

Morocco1970,Asilah beach, my friend, Pam, in the "driving" seat.

Everyone’s experience is unique, of course, and the highlight for me was probably Marrakesh, but I also loved being up in the mountains and meeting the Berber tribesmen who seemed to appear from nowhere as soon as the trucks stopped. Seated in a small café in the middle of nowhere, one of them took the long chiffon scarf I was wearing to keep out the sand, folded it many times and then rubbed it between his palms until it was reduced to a very small and tightly packed square. Quite a party trick!

If I could turn back the clock, I’d love to do it all again.